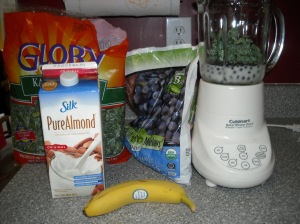 Ever since I was introduced to Green Smoothie Girl via Babies and Moms, Birth and Beyond podcast, I have been intrigued and interested in trying a green smoothie and getting into the habit of having these every day even. That was months ago though and regrettably I have not actually tried one until recently. My mom emailed me this recipe and I finally made one!

The ingredients were pretty simple and things I pretty much always have on hand, except for the green part, the kale. I have never eaten kale before and really didn’t even know what it looked like except it was some type of green, leafy vegetable. My husband insisted that kale is only for garnish, GARNISH, and who would want to eat a garnish?? Needless to say, he was disturbed. In the end though, he is the one who purchased it for me as he graciously did the grocery shopping this week so I could take our daughter on a playdate to the park. He purchased a bag with the stems already taken off and the leaves torn up and washed, ready to go. The bag was $3 but a pretty good size. The recipe only called for a cup of the stuff, so I could get quite a bit of smoothies out of it if I wanted to.

So the making of the smoothie was super easy, as easy as any smoothie recipe is. You just throw the ingredients in and blend away! With the first batch, I could see little green flakes and even had to chew a little. This did not in any way deter me, however. It was delicious! I didn’t even detect any kale flavor but definitely noticed the texture of it. So the next batch, I put on food processor mode and it blended that kale almost to oblivion. If you looked closely you could see teeny tiny bits of kale, but it was nice and smooth. My 14 month old loved the stuff, as did her mommy. She kept asking for more! I also had a friend over and did not tell her what was in it, just that it had a secret ingredient. :) She guessed it was a green of some sort, declared the smoothie delish and said if there had been some honey added, she wouldn’t have known there was greens in it at all!

If you’ve read this far and are wondering what in the world I am doing putting kale (GARNISH!) in my smoothie in the first place, take a look at these facts:

From The Health Benefits of Kale:

Eating regular servings of kale is a great way to help prevent and lower your risk of getting colon cancer, lung cancer, prostate, and breast cancer.

In a nut shell, kale fights cancer, protects your vision, and boosts bone and heart health. Who wouldn’t want that, especially when it’s yummy!

The first green smoothie was a success! I am so excited and can’t wait to make and share another with my baby girl tomorrow!