How Motherhood Came to Me

This is a story I wrote for Mothering Magazine’s Writing Into Motherhood writing workshop. Since it is no longer available on their website, I decided to post it here. 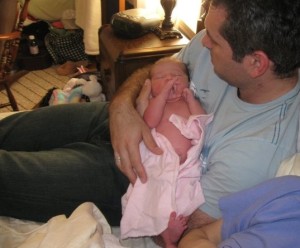 An hour after birth, at the birth center

The first time I saw her face I didn’t believe it. Maybe I still don’t in a way. She swam up to us and I turned around, looked at her father, my husband, in disbelief. She’s real, she’s here, she is the most beautiful human being I’ve ever seen and I can’t believe she’s mine.

Through the years I had told myself that I really would never have a child. Even all through my second pregnancy, even after we had passed through the time our first child had died in my womb and we were in unchartered territory, I still wouldn’t, couldn’t believe this day would come. And I guess, in that raw moment, my first emotion was shock, disbelief, even in spite of all the facts and evidence to the contrary.

The moment I knew my first baby was dead was almost not real, but at the same time very real. The doctor who performed the ultrasound wouldn’t tell us. He knew, but he wouldn’t tell us. What he did tell us was he hoped everything would be okay.

We were in the car when we found out for sure. My midwife told us over the phone. We were parked right in front of the building, where anyone coming out the double doors could see us. We cried and cried and grabbed onto each other feeling the grief full on. Then the numbness set in, the reality, the phone calls that had to be made that were too painful for me to make. I couldn’t say it outloud to anyone yet, couldn’t admit it. I had my husband do it. He broke down on the phone.

My baby, the baby that was still inside me, no longer had a tiny beating heart. It was still.

I cried every night for weeks, clinging to my husband, his arms always around me. We stayed at my parents for a couple days. It was the place we drove to after the ultrasound, needing to drive somewhere but unable to go home. I couldn’t go home yet. The books, the stretch mark cream, all those reminders lying around, would torture me. There was no way I could face them. My husband kindly removed the evidence before I went back home.*

And then there was the waiting. When would my dead baby leave my body? It was 6 hours of the most horrible pain I had ever experienced. The pain was like a vice grip around my uterus squeezing and there was so little time between each squeeze; 6 hours of unrelenting pain and still nothing. I remember feeling so — I can’t even describe it — like I wanted to come out of my body, telling my husband to make it stop, make it stop, make it stop. We were up all night. I had gotten about an hour’s worth of sleep when the alarm went off. My mind said “need to go to work”, and so I did. It seems insane now, but I needed something that made sense because my world was falling apart. They graciously sent me home with a week’s worth of bereavement pay. I’ll never forget that kindness.

I ended up needing 2 surgeries. The miscarriage went on for 2 months. It was a living hell. But God provided us with a beautiful miracle in between the 2 surgeries. My baby, my teeny tiny, not even-as-big-as-a-penny baby, did come out naturally*and we saw him and we got to bury him. I still don’t know how it happened, but what a rainbow! What a merciful and loving God to give me the desires of my heart in that raging storm. The worst part of the surgery, the part I abhorred, hadn’t even occurred. My baby was whole, not ripped from me as I had thought.

That year, the year 2006, was one of the worst of my life, but it was what I had to get through to get to the birth of my baby girl 3 years later.

If you would have asked me in my teen years if I thought I’d have children, I might have said no. I was just not maternal in any way. I’d never changed a diaper or babysat. I didn’t hold other people’s babies simply because I never had a desire to. I just didn’t get the way other women loved babies.

I was also terrified of childbirth. I once said, “Why can’t they just knock me out and take out the baby?” How I got from there to here took many years, but started with the pill. I always knew I didn’t want to take the pill, but was never really sure of an alternative. I remember thinking that there had to be a natural way to prevent pregnancy, but all I had ever heard of was the rhythm method and I knew that that didn’t work. So I starting taking the pill in the months before my marriage.

I stumbled upon some information about the Fertility Awareness Method and finally found what in my heart I knew had existed all along. I found a group of women online who used this method and formed friendships with these women I still have to this day. It was through them that I discovered a different approach and attitude toward birth.*

They led me to Henci Goer’s A Thinking Woman’s Guide to a Better Birth, and my life was changed forever. It was the catalyst I needed to finally make the decision that my birth would not be the conventional hospital experience. My birth would be just that: MY birth on my terms.

And it was. I loved her immediately. I was in a swirl, a fog. as she was laid on my chest, as I cradled her tiny, vernix-covered body. This little girl was very real and she had been wanted for so long, even before I knew I wanted her myself.

She came out screaming, which was unexpected, but makes perfect sense now. I always heard water babies were calm, but calm has never described my daughter. She came on her due date, right in the beautiful sunny spring morning hours. I had labored all night without even realizing it. It felt like time stood still.*

Labor was smooth, steady, quiet, peaceful. Warm water, dim lights, soothing voices, calming hands. It was the aftermath that was unpleasant. The bath water was red, too red, and our hour together felt too short and not as private as it was supposed to be. Something was wrong. There were needles. Why where there needles? Why weren’t we alone?

I remember telling my husband I wasn’t done yet. I knew I had to be stitched up, but I didn’t really have any idea how true that was. One moment my midwife and my husband were lifting me up to walk to the exam room. The next, I was back in bed, but had no idea where I was. Is that my husband? Why is his face so close? I asked him where I was. And then I started to remember. I had had a baby. I was at the birth center. Something was wrong, but I didn’t understand what. I heard the midwives say they needed to transfer me to the hospital. I told my husband I was scared. I still didn’t understand. Later I was told that I had passed out and had a seizure when they tried to move me, but to this day, I have no memory of that. My husband didn’t leave my side. We rode in the ambulance to the hospital.

I didn’t get to hold my baby much. I wasn’t with her and this fact still kills me. The ambulance ride was strange and not part of the plan. I had had too much blood loss. In the end, I needed 2 blood transfusions. Barely holding my baby for her first day of life was beyond horrible to me. It took me awhile to bond with her and to nurse correctly since I didn’t hold her most of the day. If only I could do that part over again, I would have insisted that I hold her.

Breastfeeding was rough at the beginning, but I am so glad I persevered. When I heard my baby cry, I dreaded the pain of feeding her. I dreaded the struggle of teaching her to latch correctly. Thank God for my mother, Jack Newman and the La Leche League. They got me to the place where I am today. Now nursing my baby is one of the joys of my life.

Night nursing is especially precious to me. I love having her so close to me at night. Sometimes I gaze at her sleeping and try to soak her in. I know soon that she will be across the hall, sleeping on her own. But for right now she needs me. She wants me. I know too quickly she won’t be my baby anymore. Already she’s toddling around, terrorizing my house. But at night, she is still. She is quiet. She still enjoys turning around after nursing and snuggling next to me. I always thought by now I’d want her in her own room, but instead I find myself dreading that inevitability. I treasure this precious gift God has given me. 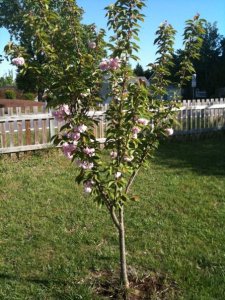 Sometimes I have a hard time remembering before my baby girl, but I do. I remember my baby in heaven, buried beneath the Kwanzaan cherry tree, the baby that my husband makes sure to tell our daughter about every night. I remember that I should have a 3 year old this spring, too but that wasn’t to be. That baby will always be asleep.

Maybe losing a child that you never got to meet makes you more attached to the one you have or maybe this is how I would feel even without the miscarriage. I will never know. I do know that I want my lost baby but there’s no bringing him back, and that another baby can never replace the one you lost.* I know I love my baby girl with all my being and don’t care if that means I’m more “mother” now than anything else. I won’t apologize for “losing” myself to motherhood. On the contrary, it is with motherhood that I have found myself.

This entry was posted on Thursday, May 20th, 2010 at 11:50 am and tagged with A Thinking Woman's Guide to a Better Birth, birth center, breastfeeding, D&C, FAM, fertility awareness method, Henci Goer, Kwanzaan cherry tree, miscarriage, motherhood, mothering, mothering magazine, natural birth, nursing, the pill, water birth and posted in About Marcella, About Me, Babies, Childbirth. You can follow any responses to this entry through the RSS 2.0 feed.
« Graco Classic Wood High Chair: Product Review
Homemade Chicken Broth »

19 responses to “How Motherhood Came to Me”

What are your thoughts? I would love to hear them! Cancel reply